As hosts for the ACF National Show in 2008 we would like to thank all our hard workers and our members, it was a huge success. Pictures of our main winners are below and the full show results are available from the link. 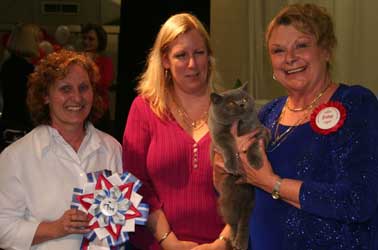 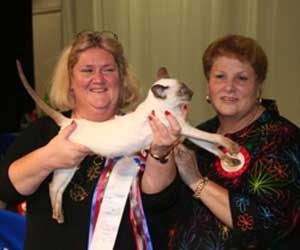 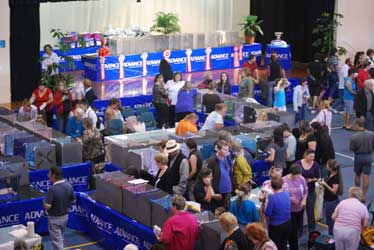 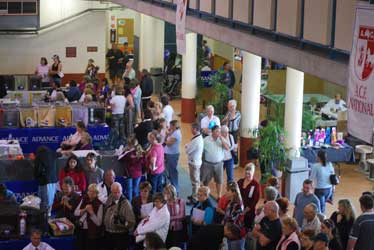 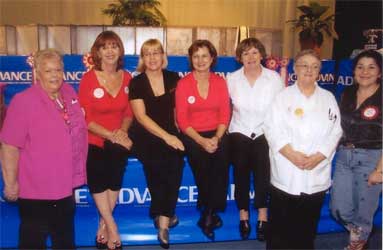 Show hosted by Queensland Feline Association in Gympie was always going to be a challenge to the show committee to say the least.

After months of ‘searching’,  towards the end of 2006 we still had no confirmed venue. Several times we felt sure we had the ideal location lined up only to discover there would be problems that could not be overcome. The main stumbling block was the long weekend show date. Most major venues that would have been suitable were unavailable due to long term ongoing bookings by various groups, organisations, expositions that keep a permanent date/venue for their annual events. It seems Brisbane in winter is everyone’s favourite ‘long weekend’ destination when it comes to annual conferences, competitions and exhibitions. Many venues we assessed were either not cat friendly, not large enough, did not have adequate facilities or were well beyond our budget.

To cut a long story short, a proposal by our affiliate Club in Gympie, the Cooloola Gold Feline Society, was considered and after much debate QFA Inc made the decision to stage the show at the Pavilion, Gympie Showgrounds. The venue was magnificent, the price was right and it was available and keen to have us. Finally we were able to move forward. Gympie is approximately 2 hours north on the main highway from Brisbane CBD. Being a large, busy highway town we had excellent accommodation options available to both officials  and exhibitors. Our 16 months countdown had begun and the next phase of planning and preparing became a daily ritual for everyone on the Show Committee.

We received major sponsorship from Advance Pet Nutrition, Oz-Pet plus a cash prize of $250 for the Supreme winner sponsored by the Gympie Times Newspaper. Many Gympie businesses and the local Council supported the National.

Entries were much lower than we expected, even considering the Gympie location. There was no shortage of ‘exhibitors’ but the average entry per exhibitor was less than two! We had good support from interstate exhibitors. One factor that cannot be ignored is that Queensland has four Councils – three affiliated with ACF and yet the entry was still lower than expected. A show every weekend is the option for SE Queensland exhibitors and with the drastic rise in petrol prices over recent months it was obvious this was going to take a toll on the National held out of the metropolitan area.

Another major issue was that the CCCofA National Show is scheduled to be held in Brisbane metropolitan area just 6 weeks later – a 2 day, 8-ring show. Hopefully this scenario of two different National’s being held in the same State in the same year will never occur again.

Saturday’s Judges Guild meeting and seminar in the Conference Room at the Pavilion was well attended (despite quite a few of us from QFA only being able to sit in for short periods form time to time due to our commitments in finalising the show set up downstairs). A lavish lunch was provided by our caterers and appreciated by all.

Saturday evening’s Welcome Reception venue was a very well attended, elegant and yet relaxed affair. The venue (the restaurant upstairs at the Pavilion) was sponsored by the local Council and was attended by the newly elected Deputy Mayor of the recently amalgamated Gympie Regional Council Cr Tony Perrett and his wife Michele. Cr Perrett was enthusiastic in his address to the Reception and he and Michele enjoyed the evening as much as everyone else. A highlight of the reception was a passionate rendition of our National Anthem by local identity Daphne Horne. One attendee told me later they had ‘goosebumps’ listening to Daphne sing – you really had to be there to appreciate the moment.

Set-up went to plan and the stadium looked ‘a million dollars’ from every angle. Thanks to all the show committee and volunteers who assisted to achieve this result. Those who attended the Welcome Reception, which was upstairs in the Pavilion, were able to look down on the stadium floor for a sneak preview of what was to come.

Show day was almost an anti-climax it ran so close to plan. Thankfully my judging timetable worked as I’d hoped. There were no unexpected scenarios, no vet-outs, no fractious cats, no complaints – just lots of compliments on a beautiful and smoothly run show.

The show itself flowed all day as smoothly as any Show Manager/Coordinator could wish – thanks to careful planning and dedicated preparation by the whole show committee. Special mention must go to our very capable and confident Show Secretary Marisa Thistlewaite who not only pioneered email entry confirmations but who also processed all entry data with such precision that all events associated with the National weekend just fell into place without any drama. Marisa’s show day recording of results went without a hitch and she was able to present the Secretary of ACF with a fully marked catalogue and sorted judge’s slips within 10 minutes of the Supreme Exhibit being announced!

The public attendance was excellent thanks to a week of great publicity in Gympie via the Gympie Times plus live ABC radio interview, shop front advertising and fabulous banners and road signs courtesy of our talented show committee member Joy Lyons of Gympie (ably assisted by husband Geoff) – Geoff Lyons hung one of Joy’s big banners in the main street of Gympie in torrential rain the weekend before the show – this was two days after his hospital stay for medical tests requiring general anaesthetic! Geoff also supervised parking at the Showgrounds on show day. Joy and Geoff took on so many chores in the Gympie area that were vital to the success of the show. They also put in a huge effort in the set up and pull down of the show and enlisted the help of other local persons.

Of course, everyone on the show committee worked diligently in their area of management. Huge thanks and congratulations to Marisa Thistlewaite, as our Show Secretary extraordinaire.

I thank Barbara LaRocca as my assistant and for her great job on securing rosette sponsorship, the ordering and sorting of them. I truly appreciated her precise show hall floorplan.

Thank you to Jenny Weekes for taking care of judges – from contracts and travel arrangements through to pre-show hospitality. Jenny also took over the management of sponsorship when Kerstin Jones was unable to continue on the show committee. Thanks also to Greg Weekes for his assistance to Jenny and for making new podiums for our judges’ tables.

I thank Judy Lewis for her management of stewards and ring clerks. They all did a great job and looked very professional on the floor on show day. Judy was ably assisted by Julie and Aaron Maas.

Thank you to Marie Mahoney for her time put in as Show Treasurer.

I also want to thank Kerstin Jones who, though unable to continue on as part of the show committee, contributed overall with her ongoing fund raising efforts. Kerstin succeeded in raising a large amount of much needed funds. Her early work in sponsorship liaison achieved the major sponsorship package received from Advance Pet Nutrition.

Other major players involved in the transport and set up/pull down of cages were Geoff Paton, Jenny and Ron Miller to whom I am most grateful.

Thanks to the wonderful staff of Gympie Veterinary Services who happily supported the National by providing their time as a form of sponsorship.

The management staff at the Pavilion could not have done more for us if they tried. From the first visit of the show Committee in early 2007 to inspect the Pavilion right up to Monday’s clean up they were always willing to help and advice and never without a genuine friendly smile and attitude – nothing we asked was too much trouble.

The social finale of the weekend was, as usual, the official show dinner on Sunday evening. This was also held in the restaurant of the Pavilion. I must make mention of the outstanding service provided by local caterers Picnicin at all our social events of the weekend. Carolyn’s provided our show day catering in their usual efficient, friendly manner.

I cannot name everyone involved individually but a final thank you to all the stewards and ring clerks, the ACF Executive members who assisted on the door and everyone who assisted in any way that contributed to the success of the 2008 National.

Monday’s AGM was once again tightly run under the expert and efficient chairmanship of ACF’s President Mr Bill Griffiths.